KSE-100 narrowly escaped the lower boundary of 33600 +/- 100 on 19th June, Friday followed by an intraday dip during the next trading session on 22nd June, Monday which led to a sharp recovery of few hundred points. Thereby, demonstrating 33600 +/- 100 being honoured on a closing basis - though with some imperfections.  This was caused due to increased volatility and as mentioned in the previous update, will lead to a discovery of new support and resistance zones. 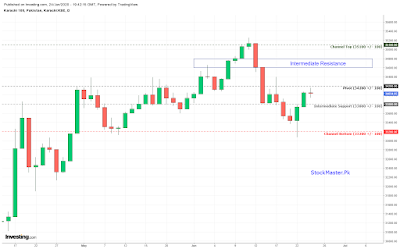 Looking forward, KSE-100 is trading below its pivot with any potential for correction taking it towards intermediate support of 33800 +/- 100. A break above the pivot will find intermediate resistance at 34600-34800. Meanwhile, the channel top has dropped slightly downwards to 35100 +/- 100. Previous resistance becomes support during downtrend or vice versa.

DoD basis, index capitalization has sustained above the outgoing weekly average, which means investor interest has remained firm so far. Further, the week closing on Friday shall disclose the full view.