Bulls have been charging relentlessly at the KSE100 but it's only a short time before steak season hits head-on. The index has rallied after breaking above 33600 +/- 300 as we predicted in last so many of our posts. Now critical resistance of the index has been upped to 38300 +/- 300 which may coincide with the Eid Al-Adha - when thousand of bulls will be slaughtered for a religious festival. I can smell the tasty steaks already!

Looking forward, we expect a pre-holiday profit-taking run at the critical resistance but international hajj being suspended this year also creates the probability of index remaining strong during the pre-holiday season. This is something that has never happened before, so the passage of time only will validate either view. Therefore, in a nutshell, we expect some correction to happen at critical resistance before deciding on the future move - up or down. The bulls definitely need some rest!

Critical resistance is at 38300 +/- 300 and in event of correction support is expected at 36900 +/- 300. Breaking the critical resistance with considerable strength would lead the market toward pre-COVID19 levels. Expected to make a double top formation. 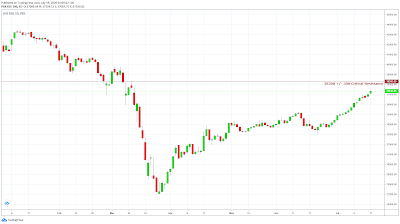 The average weekly capitalization gain was +201.30 billion/PKR, highest WoW so far as compared to the last three weekly closings. This demonstrates strong and growing investor confidence. A positive sign indeed but with caution as the market enters the overheated territory. Happy trading!