Following up from our previous update, index performed better than our expectation and after some see-saw on Monday, it shot up with a strong uptrend. Strong support within the pivot zone is also honored inline with our prediction. However, the momentum was lost in the wake of the continued downpour which caused city-wide urban floods with large scale infrastructure failure and communications shut down. When impact was highly visible on the last trading day of the week, then index remained narrowly range-bound with the last trading day remaining indecisive and closing slightly negative.

Looking forward, we may see some struggling to reach the third major resistance of 41900 +/- 200, and then onwards it shall be a breakout for channel top. Keeping fingers crossed, happy trading!  Previous resistance of 40700 +/- 200 shall act as support during any corrective downtrend with the possibility open to re-test its pivot upper boundary at 40000 points. 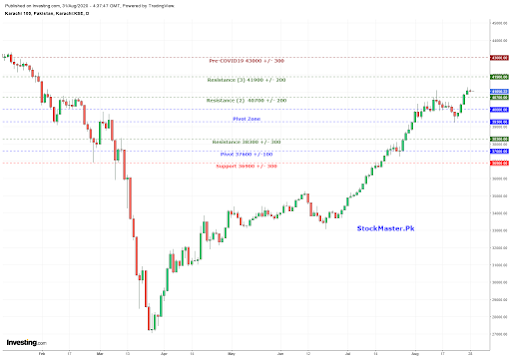 Despite adversity at the index, market capitalization demonstrates an incremental trend with the last trading day still managing to show growth over the previous day despite the index closing slightly negative. Overall, this demonstrates a strongly bullish picture of the index and recovery in the near future. We cannot rule out short term dips due to communications knock out or general profit-taking. But rest assured, the investors have shown confidence in buying the dip.
Weekly closing attained a gain of +91.33 billion/PKR which was an encouragement over the previous week which closed -15.99 billion/PKR in the negative.