KSE100 rallied during the week gaining +507 points WoW and closed at 42530 points. Weekly closing remained negative under profit-taking pressure yet the index sustained it with volatile sessions and not losing much. Signs of exhaustion have started to appear with cyclical starting to shape their corrective dip while low cap items have begun to rally.

Speaking about technicals, the index had honored its support at 41900 +/-200 and unleashed an upward rally but ran into resistance at its pivot. KSE100 will remain in the bullish territory as long as it floats above its pivot of 42450 +/- 200. Breaking below the pivot may bring substantial selling and a new support zone between 41200-41600 may be created. On the upside 43000+/-300  remains the critical top. We don't expect any immediate breakthrough and forecast late Oct to early Nov 2020 as correction period before a new trend direction is cast in. But remain hopeful on the resumption of upward trajectory post-correction.

All technical levels are on a closing basis. 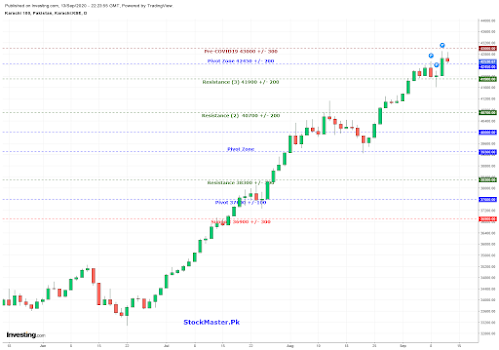 Despite the negative index due to correction, the market capitalization kept growing for the entire week and on Sept 10, it also crossed the 8000 Billion/PKR benchmark. Saturation is likely to take hold from here on and profit-taking is highly recommended. The weekly average settled at a gain of +156.34 Billion/PKR.