A quick recap of outgoing week. We had expected a swift test of pivot upper boundary at 40000 points followed by recovery. Practically, index has remained sideways for the week followed by a melt down in the last trading session. The re-test of 40000 never reached and we can say the index rather stayed in slow motion. There is no clock and calendar at the bourse. Weekly closing was at a net loss of -382 points (-0.94%).

A number of events and political noise may have kept the interest low at the bourse but provided an opportunist dip for value hunters.

Looking forward to week 48-2020, the possibility to retest 40000 on closing basis remains open. So a negative start of the week is expected and could remain another dull week. Monetary policy announcement due on Monday 23-Nov is a potentially positive trigger but it is counter balanced by roll over week. As hike of interest rate in Turkey has set speculation that Pakistan may follow suit. (Source:Bloomberg) but economic indicators hint towards an unchanged policy and any increase cannot be afforded. In plain sight, we have a pessimistic view. 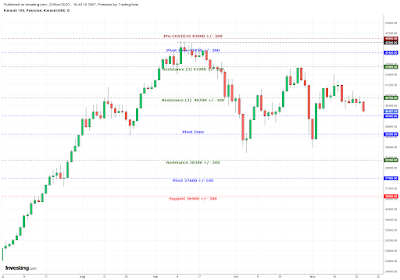 The last trading session of the week observed significant profit taking and weekly average capitalization has fizzled, wiping out the gains of outgoing week to close in a net loss of -77.62 billion/PKR. Not a significant number as observed during bearish rallies but the onset during the early phase of recovery is disappointment.