KSE100 gained +620.32 points or +1.38% WoW basis - significant appreciation as compared to one of the worst weekly performances earlier. However, it failed to cross its pivotal resistance and the divergence signal remains active with a bearish trend prevailing. But we predict a better performance ahead and expect the current cycle to end by May-2021. Our stance has been consistent per se previous update. The index must sustain above its major resistance of 45500 +/-300 to initiate a breakout (omitting the target of pivotal resistance at 45100+/- 100 because it is spaced too close to major resistance). On the downside, major support at 43K and floor at 40K are still exposed. All supports and resistance are indicated on the chart below. For better understanding, please read the updates from the last few weeks. 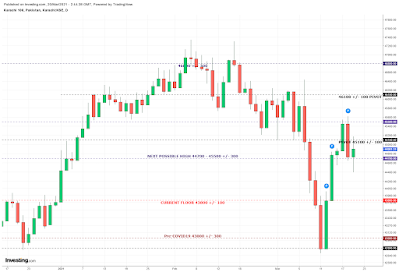 Weekly average capitalization observed a gain of +120.13 billion but remains below the critical benchmark of 8000+ billion/PKR by a narrow margin. On our capitalization chart, the linear trend line has been replaced with an exponential trend line as we believe it reflects the market better. The trend is gradually crossing over its long-term horizontal resistance which reinforces our opinion that bulls will eventually emerge victorious in the long battle.

In the financial markets, SBP released its monetary policy on 19-March keeping the interest rates unchanged at 7%. Whereas long-term interest rates continue to show appreciation. We believe a mid-term correction in policy rates may be due sometimes in the future once the COVID-19 clouds begin to disperse and a sudden jolt of consumer demand starts to overheat the economy.

Events that may impact the equities market are MTB auction on 24-Mar and is of particular interest for being the largest auction of the quarter with a rounded off-target of 1050 billion/PKR. The last auction on 10-Mar with a rounded off-target of 700 billion/PKR sent larger than expected shockwaves across the stock exchange. A short-term liquidity injection conducted by SBP OMO of 7 days on 19-Mar may dampen the shockwave. We have an interesting week to watch ahead with a lot of conflicting factors pulling in opposite directions!

If you enjoyed reading this update, please let us know in the comments section and share it with your friends. Your efforts will contribute towards further improvements in the future. 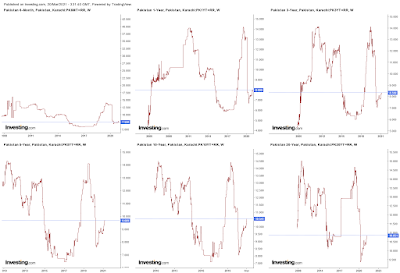