KSE100 closed a second consecutive week in red, making a weekly loss of -1220.68 points or -2.68%. Our important benchmark of 45500 +/- 300 was finally crossed and honored as support which sends out a strong signal of bulls returns. Looking forward, the index is expected to see a triple top at 47000 +/- 300, and a breakout from here would lead to a double top formation at its all-time high of 53000 +/- 300. On the downside, support remains valid at 44700 - 43000 +/- 300. We expect a few more hiccups ahead, but overall stability has started to emerge. Last week's update blew the horn to mark the start of bear hunting season and there appear very reliable sharpshooters in the league! Plenty of trophies await them.  To better understand this update, please review previous updates from the last few weeks.

[Edit: Correction has been made to incorrectly report index figures] 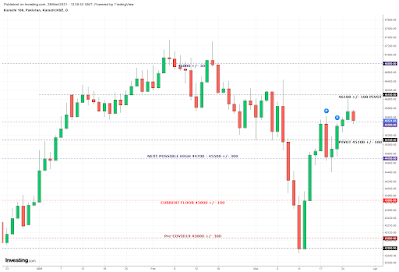 Market capitalization recovered quickly after a drop below 8000+ Bn/PKR for two consecutive weeks earlier and closed the week with an average gain of +68.35 Bn/PKR - roughly half of the previous week's gains. During the week SBP auctioned off treasuries worth 1,549.71 Bn/PKR without making a significant dent into the equities market as three short-term liquidity injections overlapped with the auctions and sparing the bourse from a 10-Mar style meltdown. With two forces acting on it in opposite direction, the bourse rather remained indecisive throughout the week - in accordance with newton's laws of motion.

To recap in layman's terms, SBP conducted treasuries auction on 10-Mar & 24-Mar whereas liquidity injections were conducted on 19-Mar, 25-Mar, and 26-Mar respectively creating a net inflow of +584.13 Bn/PKR. We do not have a reliable mechanism to clearly understand the impact of these money market operations but plotting them against index performance can help us analyze with reasonable covariance. Advancements in data analytics may unlock better understanding. 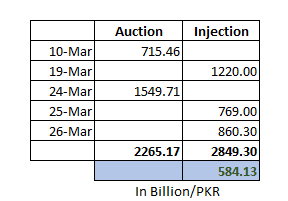 Happy trading and if you enjoyed reading this update, please let us know in the comments section below. Like and share with your friends!