Bourse remained unpredictable and whip-saw the entire week. There is no predictable move to analyze and write any technical analysis on. There seems to be a suspicious quiet on the abnormal behavior from July to Sep currently. Reforms happen to be a long-term thought-out process done swiftly after a lot of deliberation. Pakistan bourse seems to become a playground of policymaking at the whim. Instead of a well thought out process being put forward, the slow introduction combined with piecemeal reforms takes a toll on the market every few months. On the fundamental side, the central bank has upped the interest rate by 25 basis points but that alone is not a significant impact to drive the market down. However, it does point to the future tendency of the interest rates rising to cool down inflation. This pretty much means it's time to pack up bags from the PSX.
There is no obvious explanation of the capitalization meltdown, but the massive loss does paint a picture of the game over. It's time to roll the red carpet for an exit strategy. Let us know your opinions in the comments section below.

If there is to be a loser in Pakistani history written down in golden words, it has to be the KSE100 index right now. Not only it keeps failing to keep any trajectory but it has also perplexed many analysts into frustration. Some had a hint of this when the longer-term futures were launched but seriously it wasn't expected to run this long. PSX remains a bourse where long-term policymaking is absent and short-term fixes prevail to benefit the few. A downward slide is part of any bourse but to keep it frustratingly slow is an art mastered as PSX. Currently, the index is not holding any support or resistance, and it's worthless to make any speculation on it. Take benefit of the dip and briskly sell away at strength. At some point, the fortunes will take a turn for the better. Major support and resistance are marked below. 46500 +/- 200 is proving to be pivotal support but due to the instability of the market, it cannot be relied upon so early. 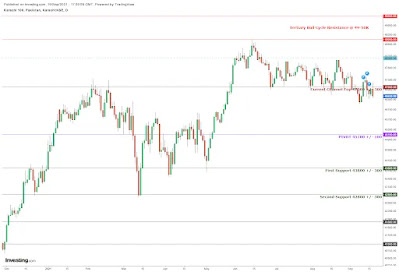 Average weekly capitalization has remained on a losing streak for three consecutive weeks but also the losses are shrinking which could be a sign of exhaustion. Only hope can save us!
MTB auction on 22-Sep may adversely affect the bourse.

A break below 47000 +/- 300 was observed with a floor break during the week but weekly closing has once again been sustained above the floor. The bulls have begun to wave up but only their continued marching forward will ensure their survivability. Looking forward the stance should be accumulating the dip and protecting the profits. The week ahead will be the decision-maker. There is not much to analyze from this week as its continuation of the same stance. 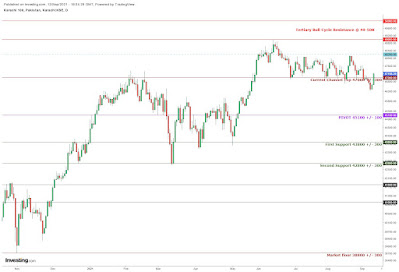 Another week closed with a losing market capitalization but the last trading day made the highest gains and the trend is expected to continue in the next. So happy trading and do let us know your feedback in the comments section below.

The week saw another flop performance with 47000 +/- 300 tested once again as support. There has not been any noticeable change in the market performance to highlight in an update. The last trading day of the week was also washed down by heavy rains which have always shown a tendency of triggering panic sell. Read the last few week's updates to get a good glimpse into the most disappointing performance ever. However, we did suspect the bourse to go through a cycle reset which it is doing pretty much. This will open up the upside for a new high. So looking forward, the strategy is to take advantage of the dip and wait for a breakout. 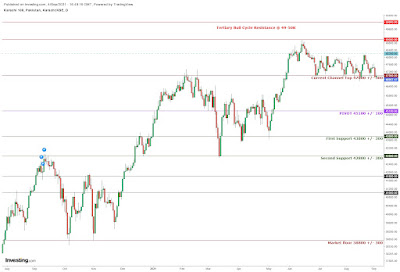 Market capitalization has remained flat. Gains made in one week were lost in the next. With average weekly capitalizations fluctuating in a narrow range. This doesn't really point towards anything but a painful range-bound market. There is nothing visible in immediate range to speculate on it. Hold with patience and carry on.

If you enjoyed reading this update do let us know in the comments sections below.